And a child will lead them…

I imagine Omar was very nervous. Not because he didn’t know the WordPartners curriculum. After all, he’s been one of our most eager learners in Honduras these past two years. No, the problem was his age. He looks like he’s in his 30’s. What would the 14 other pastors think (many of them older than Omar) as Omar passed on the WordPartners training to them?

One pastor who was coming to the training had already started ministry when Omar was only 11 years old. How would this seasoned pastor respond to this young whipper-snapper???

Talk about intimidating! How would you respond if you were Omar? This experienced pastor came to the training, not knowing that Omar was leading it. His jaw dropped: “Omar? Is Omar going to teach me?” This was nonsense.  “Omar is just a child to me. How’s he going to be able to teach?”

As Omar and the 14 pastors began to study the book of Jonah, something dazzling happened: the Scriptures became alive. The Spirit of God began speaking through the Word of God. As so often happens, the time of immersion in the Word was rich, deep, encouraging and convicting. So convicting, that at the end of the week this older pastor repented for his arrogant attitude. Said he: “I’ve really just been wasting my time — I’ve been wasting 35 years of just preaching nothing.” He continued, “Really I am the child, and you are my father.” 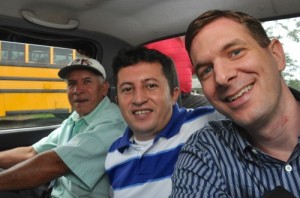 “And a child will lead them…” God is using young pastors like Omar to teach other pastors how to study, teach and preach God’s Word. Thank you for investing in faithful men like Omar.

Honduras is the poorest and most dangerous country in Central America, yet the Word of God is increasing and multiplying there. In partnership with Omar and others, we are launching a pastoral training movement in Honduras, to the glory of God. Rejoice with us!