“So the word of the Lord continued to increase and prevail mightily.”

Those are the words recorded by Luke in Acts 19:20. These words describe what we are trying to do all over the world: make God’s Word spread widely with power! 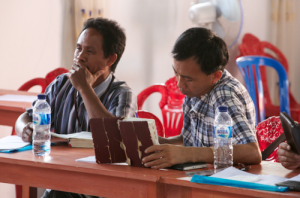 Gustin (on the left) during a training session.

Gustin, one of the pastors we train in Indonesia, is doing his part to make this happen. Every six months Gustin makes a grueling 14-hour trip from his remote island to receive WordPartners’ Training, and his efforts are not in vain.

He’s already put his training into practice by preaching evangelistically to a group of animists near where he lives. Animists, like the ones Gustin ministers to, combine spirit worship with some elements of Christianity for a hodge-podge of beliefs that fall way short of Scripture and the true Gospel.

Even so, they do know several stories from Genesis. Gustin decided to use this fact—and the training in Genesis he had received—to his advantage by preaching the gospel to them from the biblical stories they already knew. 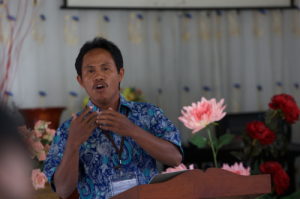 As soon as these animists heard the true Gospel, they believed!

After they saw the light and professed Christ, they took their wooden carvings, prayer belts and other mementos from their animist past, piled them up, and set them ablaze. This burning ceremony celebrated the amazing work of God in their lives by destroying tokens from their previous life.

God’s Word is spreading widely with great power in Indonesia!

God is using WordPartners Training in amazing ways to equip men like Gustin to reach all sorts of people—including former spirit-worshipping animists.

Praise be to God!