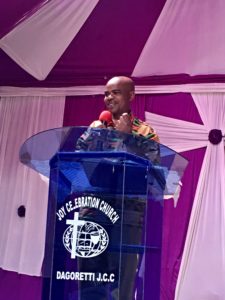 John used to be a “rhema” preacher—that is, one that ‘followed the spirit’ in preaching—saying anything that came to his head at the moment. After studying 2 Timothy’s command to “preach the Word” during a WordPartners workshop, John repented of his preaching style and began to preach expository messages through Jonah. This caused many church members who liked his former style to leave the church.

Months passed since we heard of this, and we wondered if John was continuing to preach the Word or if he went back to his former ways.

When WordPartners’ Doug Dunton reconnected with John, he confirmed that he was preaching the Word and that his church was growing in ways he had never before seen. “Where is this growth coming from?” Asked Doug. “

Through new converts,” John said, “It’s not the same kind of growth but it is growth of transformation and regeneration in people’s lives… We can see the difference of God’s Word in our lives. And we thank God for where He has taken us.”

John is now leading other Pentecostal preachers in WordPartners training to help them follow God’s command to “preach the word.”

Learn more about fighting the prosperity gospel in Africa through Bible training.