As is true in most North African countries, Islam is the dominant religion in this security-sensitive area. It is estimated that fewer than five thousand are evangelical Christians in this country of many tens of millions. Most churches meet in homes, and most leaders lack training.

Twenty-five house-church leaders gathered in a coastal town of this country for a two day WordPartner workshop. Some traveled by train six to eight hours to attend.

Doug Dunton described the group’s enthusiasm, work ethic, and desire to learn as “like nothing I’ve seen in my fifteen years of training pastors!”

Trainer Doug Dunton described the group’s enthusiasm, work ethic, and desire to learn as “like nothing I’ve seen in my fifteen years of training pastors!” Dunton continued,

After each session we have a discussion and then a short break. Our breaks were often short because [the participants] wanted to get back to the study of God’s word. After the first day of training, there was a spontaneous review that took place before our eyes. One of the leaders stood up and started reviewing the training, principle by principle. First one person began to answer his questions, then it became two, then three, then four. The energy continued to grow, and soon the excitement was overflowing in the room. Even when we moved out of that room to the dining-room table for dinner, the discussion continued! 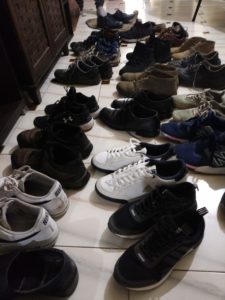 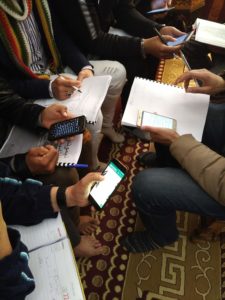 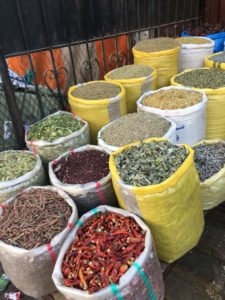 A Passion and Urgency to Train Others

As the workshop progressed, the enthusiasm grew and expressed itself in a sincere desire to train up other believers in their country.

The next morning, when we returned, we learned that they had spent much of the evening – until midnight! – discussing and planning how to pass on this training to others.

Our second day with them was no less engaging, not to mention inspiring! We finished by reflecting on the fact that many of these leaders have a very small group of Christians to share these truths with but they are leaving with overwhelming energy to pass on what they learned from God’s Word.

A New Experience of Spiritual Family

One day over lunch, Doug Dunton found himself listening to one man’s testimony. Years ago while browsing a nearby used bookstore, this man noticed an old Arabic Bible – which is illegal in his country. He was curious, and that curiosity led to the courageous action of buying it and reading it. As a result, he fell in love with Jesus.

After his conversion, his wife left him and his grown children disowned him. That was twenty-seven years ago. The brother went on to share that this workshop in 2 Timothy was the first time he had ever tasted the sweetness of Christian fellowship. Doug Dunton remarked,

Even though you could tell there was sadness in his heart because of the loss of his family, he demonstrated great joy in meeting his new family (the fellowship of Christians). The sacrifices that he has endured over these twenty-seven years of following Jesus are incredible!

Partnering with God to Make History

We have such joy in equipping these eager saints to preach the Word and train others. One WordPartners trainer commented after the training, “I can’t help but feel like we’ve been given the undeserved privilege of joining God in making history here!”

Join us in prayer: