A Man Walks into a Bar… and Comes to Christ?

Years ago, a Ugandan man named George entered a bar looking for a drink. What he didn’t know is that God would use his time at that bar to radically change his life forever.

George went into the bar as an unbeliever and walked out a follower of Christ. Someone took the time to share Christ with him and as a result he was born again. Inspired due to his newfound faith, George witnessed to the owner of the bar–and this man also received Christ!

They soon closed the doors of the bar and reopened it as a church (pictured in the above photo). George is now a pastor that ministers to hundreds in his area. 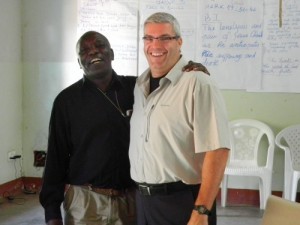 George began the WordPartners training program over nine years ago. God has worked in his heart in amazing ways and George has experienced various layers of transformation.

After receiving training in the Scriptures, George now trains others with the WordPartners curriculum, including four separate groups of pastors and thirteen church planters. George has even led his wife through the training, and she has passed on the training to other women.

Before being equipped through WordPartners training, George’s congregation didn’t even bring their Bibles to church. After training, they make big sacrifices in order to purchase their own Bibles.

One man, an unbeliever, noticed such a positive change in the community through George and his church that he gave George a cow to thank him! This cow is now used for ministering to the people of their community.The transformation George has experienced has blessed his community, not only by pastoring his church, but by reaching out to pygmies and other outcasts in his community. 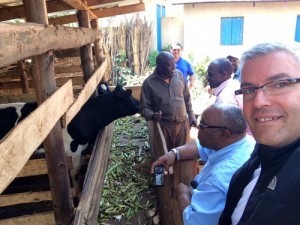 Doug and his “Cow Selfie” with George and friends 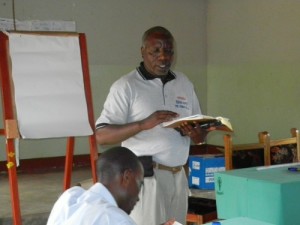 When our team was in Uganda recently, they were able to speak in George’s church, which was bursting at the seams with hundreds of people listening intently to the message preached. After the sermon, eight people came forward to talk to Pastor George and receive Christ. One congregation member even commented how the guest preacher (our Doug Dunton who had trained George) preached just like George!

What a gift to see and hear how God is using this pastor to impact his community as he faithfully exposits God’s Word. His people are recognizing that he has something important to say from God’s Word–and they want to listen!

Pray for George and the dozens of others that we train in Uganda as they implement these new lessons in their churches and their communities so they can become transformed through God’s power.