Why I’m a WordPartner:
Pastor Eshete Belete of Ethiopia

Flourishing in God’s Word through exile, persecution, and suffering

SUFFERING IS ALL RELATIVE, at least according to Pastor Eshete Belete of Ethiopia. By most standards, the factory-worker-turned-pastor has suffered much because of his faith.

Shortly after becoming a follower of Jesus in high school, his father kicked him out of the house. “[My father] was a fanatic Orthodox believer,” says Pastor Eshete. “So it was a great shame to him that his elder son became a believer of a new religion, which was counted as the ‘western’ religion.”

Later in life, Eshete endured persecution of another kind when the military regime of that time jailed, then tortured him. “[I was] tortured and beaten. Both of my legs and feet were almost dead and paralyzed,” he recounts. The physical trauma still affects his life today, but he’s quick to interject, “God has saved my leg from being totally paralyzed.”

Pastor Eshete has a nuanced and humble theology of suffering that comes from having walked some of the hardest roads himself. His perspective? This is all part of what following Jesus means – and the Word of God is worth it.

“The Word of God is filled with stories of suffering for the Lord’s sake. Joseph was persecuted and suffered. Moses suffered, . . . David . . . , the prophets . . . ,” Eshete notes. “And in my suffering, words of encouragement, comforts, provisions, visions all came out of the Word of God which was hidden in my heart.”

After his conversion and then exile from his biological family, Eshete took refuge in the home of some of his fellow church members.

“Is that not amazing?” marvels Eshete. “Your father kicks you out, but these guys you met at the church welcome you in! That showed I belong to an eternal family – the family of God.”

“This is all part of what following Jesus means – and the Word of God is worth it.”

A gifted musician and poet, Eshete joined his church’s choir as a way to serve the Lord. Though he was a singer with no formal theological training, he found himself teaching and preaching at every possible opportunity, and fellow believers began to recognize his calling from the Lord. Eventually the elders of his church challenged him to be a teaching pastor in one of their local churches.

After a period of prayer and discernment with his then young family, Eshete left his government factory job of 13 years and accepted a position at a church in Addis Ababa, the capital city of Ethiopia. Soon, however, God multiplied his impact far beyond his local congregation.

A turning point in Eshete’s pastoral ministry came in 2008, when another local pastor invited him to participate in WordPartners Training. The transformation completely altered the course of his preaching – and his life.

His assessment? “I totally changed – 180 degrees.”

“Before the training,” Eshete recalls, “I was preaching and teaching the Word of God for about ten years, but in my past experiences, I only worried about ideas – or, so to say, the felt needs.”

“But, the reverse is true now. I worry about the Word of God,” he says. “When I get the passage, I just dig into it to capture the heart of God. I start thinking, ‘How do I present this fresh and powerful Word of God?’”

“If the Church deliberately trains pastors and teachers to be good expositors of the Bible, surely the community will be filled with changed lives who commit themselves to be change agents in their community.”

Like many other pastors, Eshete found that WordPartners Training reshaped more than his preaching and teaching; God has used it to transform his whole life. “Now I have started enjoying the freshness and transforming power of the Word of God myself. My kids are enjoying this blessing and I myself changed.”

Convinced more than ever of the vitality of God’s Word, Pastor Eshete began thinking of other Ethiopian pastors, aware of their need to experience WordPartners Training for themselves, and even sensing a call from God to “redeem the pulpits of Ethiopia.” But he soon realized he couldn’t do it alone.

“It was impossible to reach the entire country by myself only,” Eshete remarks matter-of-factly. “I tried it in early days, but my mentor Doug [Dunton] has wisely shown me how it will be tiresome and impossible.”

Doug, who serves today as WordPartners’ executive director, recalls the conversation tenderly. “I said, ‘We need to go deeper before we go further,’” he remembers, adding, “The work would not be what it is today if he hadn’t wrestled with that and understood that he needed to pour his life into a few faithful men who would pour their lives into a few faithful men.”

“Today,” Doug concludes, “he’s disciplined himself to go deep with a few, to be able to go broad with many.”

“If the Church deliberately trains pastors and teachers to be good expositors of the Bible,” Eshete offers, “surely the community will be filled with changed lives who commit themselves to be change agents in their community.”

In the course of “going deep to go broad,” Eshete trained an initial group of five key national pastors, who then trained 15 area leaders, who in turn trained 75 Bible study leaders.

“The movement came into every home. It pushed the old house ladies to go out evangelizing their neighbors, inviting them over for coffee and snacks together. It happened to win 28 new converts within only a two-month period.” Eshete shares. “Those ladies were labeled to only be prayer warriors; no one was expecting them to be an active witness to Jesus moved by the heart of God for the lost.”

Today, as our key partner in Ethiopia, Eshete leads a national team of five training leaders. They’ve divided their country into five regions, and each leader directs a team that multiplies the training throughout their region.

“I am convinced that there is nothing more worth living for than saying what the Lord has already said to his people. This is the noble cause, one worth living and dying for.“

Eshete carefully reflects, “All these stories, whether passing through persecution or being blessed with ministry successes are because of the grace I have received from my Lord and Savior Jesus Christ. He has loved me – working in me, through me, and with me. And He has worked through the prayers and advice of many friends and partners in the gospel. Let all the glory be to Him.”

Committed to the Gospel

Eshete doesn’t think his days of persecution are likely to be over, but his vision for the transforming power of the Word of God outweighs the potential cost.

“I am convinced that there is nothing more worth living for than saying what the Lord has already said to his people,” he says. “This is the noble cause, one worth living and dying for.“ And to that point, he invites other pastors to expect persecution of their own.

His exhortation to fellow pastors and followers of Jesus challenges each of us to stand firm to study God’s Word, preaching and teaching it as it continues to transform us. “If we do, we will surely see ‘the Word of God flowing powerfully through every church to every nation.’”

Pastors like Eshete and the team in Ethiopia are an inspiration to followers of Jesus around the world, and we’re grateful to work alongside each of them as God’s Word continues to move in and through His people everywhere. 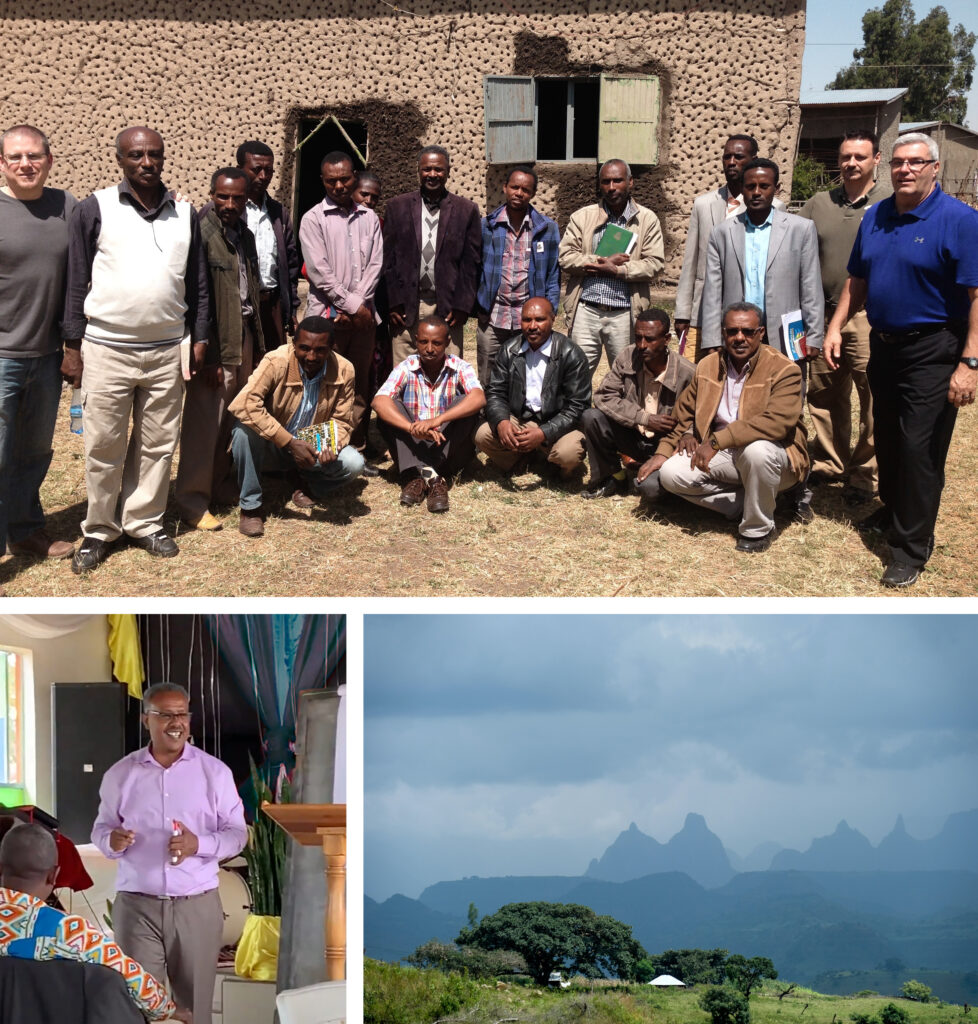 Partner with Eshete in Prayer