Preaching to the Affections: An Interview with Dr. Josh Moody

Jonathan Edwards said in The Religious Affections that preaching has the goal of stirring hearts and affections. But what does this mean, and how is it done? I’m here with Josh Moody, the co-author, along with Robin Weeks, of Burning Hearts: Preaching to the Affections from Christian Focus. In an earlier interview with Dr. Moody, we differentiated between emotions and affections.

Dr. Moody, can you explain the difference between preaching to the affections and preaching to stir emotions? 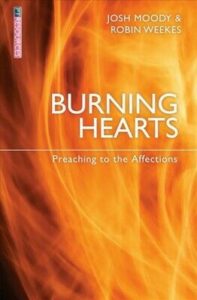 Josh Moody: Yeah, so back to the definition between the two. So, emotions are more purely feelings, whereas the affections are a combination of the thinking, feeling, and the willing – what you will and then these actions. The affections should not, then, bypass reason or logic or biblical understanding. It’s possible to stir up feelings in a way that is not related to truth. When you’re preaching to the affections, what you want to do is capture people’s minds and hearts, in our way of thinking. In biblical language, the heart is really the center point of who you are. What you’re aiming at is capturing the heart – which doesn’t mean just the emotions; it means the center point of who you are: your thinking, your feeling, that then leads to will. You want to persuade them with the truth – by it being the truth – and then let the emotions connect with that. There is an affect of will, affections towards action.

KH: It reminds me of a quote I heard from one of the guys that we train overseas. He said that, before taking our training, he would preach with the intention of having people shout, “Hallelujah!” and “Amen!” and he would really try to drum up their emotions. But then after studying the Word deeply in our training, he realized the Word of God should be what produces the amens and hallelujahs. So can you speak to the relationship between God’s Word and the affections?

JM: We want people to say, “Amen” and “Hallelujah.” We want them to be exuberant, enthusiastic. We don’t want less of that; we want more of that. But what we want is that to be in line with the truth and, therefore, in line with God’s Word. So, I wouldn’t want to leave someone with the impression, thinking that if I’m to preach God’s Word, that means I’m to calm everyone down, get them be less excited or less emotional, less moved. Some of that’s cultural – how emotional someone is. Some of it is individual – different temperaments and personalities. But you certainly see a lot of emotion in the Bible around truth. Read the Psalms. There’s a lot of emotion in the Psalms. But what we want is to bring into line increasingly in our own minds and our own hearts and in our own thinking and feeling the connection between that and God’s Word. Instead of making them excited about something vaguely connected to Jesus, you want them to be excited about the glory of Jesus and to be saddened by when people don’t see the glory of Jesus. There’s a whole range of different kinds of emotions and truth, and that’s connected to God’s Word. You’ve got to bring all of those things into line so that we are more and more whole as Christians and as people – more and more thinking and feeling as we were made to think and feel. God’s Word is the agent for that change, that direction, that new affection.

Because of that, preaching to the affections and employing God’s Word to stir people’s affections [are important] so the affections are in line with the truth. The truth is then an expression of God’s Word. Because of that, not only is preaching to the affections the right thing to do at any time, it’s a particularly strategic thing to do in our time, because people are less likely to be won over by the more cerebral or intellectual end of the truth, but the affective end of truth. Again, if affections are the thinking, feeling, willing unit that creates an affect towards action, then emphasizing that part of what we should be doing – the affections – is the part that people are most likely to be working with anyway, in their culture at home and at work. So, it’s a bridge to that world.

Sermon Illustrations & Preaching to the Affections

KH: There’s an interesting section in Burning Hearts that talks about sermon illustrations. I’ll quickly read a portion before my question:

That being said, what are some characteristics of an illustration that effectively engages the affections?

On the other hand, if you get an illustration that does express the meaning of the text that you are looking at, but does it without much engagement or a great deal of interest, while in some ways that’s better than the illustration that’s completely unrelated to the text, it’s not a whole lot better and could even be worse. Because what you could be doing is illustrating the meaning of the text but without any impact. And so the person understands the text better, but they don’t think it matters.

The ideal illustration is one that points people to the meaning of the text and moves them to the appropriate degree and in the appropriate way as that text speaks. Of course the genius of all geniuses at this was Jesus. “There was a man who went out to sow a seed . . . .” The prodigal son. The vineyard illustrations. These were all so perfectly poised to illustrate what he’s saying. Then it becomes the world which you can look within and go, “Okay, I can feel what that would be like.” Edwards does that, not so much by stories and anecdotes but in the actual sentence. He weaves into the sentence an illustration. An example of that – I’ll do it just off the cuff right now – would be, “An illustration is like a window from a dark room in a beautiful, bright sunshine-filled forest.” That’s what an illustration is. It takes you out of the darkness of your incomprehension into the place where you want to go, and you see that that place is good.

KH: That’s helpful. I’m no master illustrator. Something I’ve found useful in connecting an illustration to affections can be as simple as a question – thinking through this person in this situation from the illustration, “How much more should we, because of what Christ has done, want to follow him?” – or something such as that and having people connect that truth to their heart and their desires.

JM: That kind of application question is really good. You’re not telling people what the answer is. There’s a place to tell them in preaching, of course, but you’re helping them see it. You’re not interrogating people, but you’re asking them questions to help get them, inside their brains, thinking through. I think it was Calvin who said the mind is basically a room filled with pictures. Our minds tend to be visual, and then we express the pictures in our heads, which is sort of jumbled up. We’ve been given the gift of speech, so we clarify those images with speech. If your speaking can then paint a clear picture in people’s minds – whether you’re asking questions or telling stories or interweaving into the sentence a few metaphors or similes – then you tend to get communication comprehension.

Preaching Christ to the Affections

KH: Paul, in 1 Corinthians 2, says he preaches Christ crucified. How does preaching Christ connect to preaching affections? You mentioned earlier wanting people to see the glory of Christ, but how would you describe that connection point?

JM: That’s the ultimate connection point. If the goal of preaching is that people would see Jesus more clearly in all His beauty and glory and fall at His feet and worship – if that’s what we’re trying to achieve – then we need people to understand that. We need people to sense the truth of that, will that, and therefore have an affect or desire to do that. It would be the topical theme of the text about the glory Christ that would require the greatest level of affection or impact. “Who is worthy to open the seal?” Revelation 4 went into, “I saw the door was open to heaven,” and then, “Worthy is the Lamb.” That kind of affectional connection would need to be the highest, because He is at the highest. So again, it’s all about an appropriate, human, spiritually given response to truth. Jesus is the greatest truth of all. The affectional impact would be related to the greatest truth of all.

KH: As Paul mentions in 2 Corinthians 3:18, as we behold the glory of Christ, we are being transformed. We want to preach Christ in all His beauty and goodness, and our affections, when we understand that, will naturally change. The last question is a practical one: Could you share an example from your own preaching ministry of maybe a text of scripture and how you thought about it in terms of preaching to the affections?

JM: I can share one with you I’m working on at the moment. I’m working on text from John’s Gospel where Caiaphas the High Priest unknowingly prophesied that Jesus is going to die and that his death will be for the salvation of all the scattered children of God around the globe (see John 11:45–57). He unknowingly prophesied because he tried to kill Jesus. All of the Jewish leaders had no idea what to do with this guy. Everyone is believing in Him. It’s a real problem from their point of view. Caiaphas, the High Priest, says, “You guys have no idea what you’re talking about. We’ll just kill him. It’s better that he die than we all die.” John, the author of the Gospel, then says, “He didn’t realize that he was prophesying that Jesus would die for his people and for all the scattered children of God” (John 11:51-52). It’s a huge irony – that he’s trying to kill him and yet he’s, at the same time, prophesying that Jesus is the Savior. But it’s not irony as in, we think of things as ironic as cynical or sarcastic – it’s not that kind of irony. It’s a Gospel irony.

Then, I shape the flow of a whole sermon that expresses the way that God delights to use the weak things of this world to shame the wise. As Jesus said in Matthew’s Gospel, “Blessed are the poor in spirit. . . . Blessed are the meek” (Matthew 5:3, 5). There is this counterintuitive paradox going on, a shift because we’re fallen, because there is evil in this world. God nonetheless takes that evil and reshapes it to His glory. Any kind of affection needs to be related to this surprise – “Wow, that’s really how God works” – and at the same time, is related to this extraordinary security. “Even when I’m being persecuted or attacked as one of Jesus’s children in the body of Christ, even there God takes and redeems for His salvation purposes. Wow, He really works like that, and there’s security that He does work like that even in the worst situations.” It’s not so much just finding a little illustration, it’s letting the whole impact of that text shape me so that every single word I have to write or speak about is shaped by that same tone and tenor. Then illustrations or the shape of the words all tend to flow out of that – all the way from beginning to end.

KH: Praise the Lord for that truth and thank you so much for your time today. For those listening, how can people connect with you online?