Why I’m a WordPartner:
Oscar Paul Mendoza of Ecuador

When the missing piece changes a country

THE HOME in which Oscar Paul Mendoza was raised in Ecuador didn’t have electricity, or running water, or a father. But he had a single mom who worked hard and knew a chance when she saw one.

She moved her son to the city to live with an aunt and find more opportunities. And there, her son did find opportunities. He was a good person and made friends who were also good. He worked hard and went to college and was studying to become an anthropologist.

But still, something was missing.

“I was happy, but I didn’t have any peace,” Oscar Paul said.

When he was 15, he’d been to a church service with friends. Four years later, he revisited what he’d heard. And he found peace in the gospel.

Within three months, he was joining his church in a time of prayer that went from morning until noon and took them all over their city of Portoviejo.

Oscar Paul prayed for people on the streets whom he’d never met.

“We prayed that God would bless them, would heal them, would allow them to get to know the Lord,” he said. “We seemed maybe like crazy people.”

And then he got a crazy idea.

“I felt that God was telling me, ‘I don’t want you to serve these people as a doctor, an engineer, or as a lawyer,’” he said. “’I already have people like that in the church. . . . I want you to be a pastor, a preacher, to minister to them.’”

He planned to switch his studies to go to seminary. But then his pastor said No.

“He suggested for me to finish university first before going into ministry or before going to seminary,” Oscar Paul said.

He took the pastor’s advice, but then, the government closed the anthropology program. Oscar Paul saw that as a window of opportunity to go to seminary. But again, his pastor urged him to get a university degree in something else first. So, Oscar Paul switched his major to engineering. But again, the university soon dropped that program because it didn’t have enough students.

This time, he chose engineering for mining and oil production. But his heart wasn’t in it. At the same time, his pastor had suggested that Oscar Paul volunteer at the church in various ministries – music, children’s ministry, youth to try out some other ministries. When he realized those ministries weren’t a great fit for him, Oscar Paul’s desire to be a pastor deepened.

And so, come what may, he quit the engineering program and went to seminary, without his pastor’s approval.

So, when it came time to do practical ministry for his seminary degree, he couldn’t go back to his home church and pastor, whose advice he didn’t follow. He had to rely on relationships with other churches and pastors to gain experience.

When he graduated, though, he didn’t know where he would go work. But then the pastor from his home church resigned. And they gave Oscar Paul a role working in discipleship and leadership formation. Finally, this was what he’d been working toward.

A NEW APPROACH TO SCRIPTURE

Then one day, four years later, in 2011, the head of his Missionary Alliance denomination invited him to a WordPartners training. This training took a different approach toward preaching the Word than he’d previously learned. At the workshop, he learned how to study a book of the Bible as a whole, looking for the main idea, using hermeneutical principles, and connecting what he was studying with the rest of the Bible.

This way of approaching Scripture was another missing piece for Oscar Paul.

This way of approaching Scripture was another missing piece for Oscar Paul.

“I’m not going to preach anymore based on my feelings about something or about, you know, a need that I see, but what the Lord tells us there in the book that we’re studying,” he said.

Oscar Paul applied what he learned so far to his own teaching. Soon the congregation also started studying the Bible for themselves, since they wanted to be prepared for the Bible studies that Oscar Paul was cultivating. This new way of understanding Scripture changed people’s lives. For instance, the musicians studied the Psalms, which helped them lead worship well even during hard times.

“They learned what to do when they were mad, or when they were not feeling love for other people,” Oscar Paul said. “They discovered that they could reach God and express to him all that was in their hearts.”

For those struggling financially, they found ideas in the pages of the Bible.

“They started reading the book of Proverbs, one Proverb each day,” Oscar Paul said. “When they read Proverbs, they learned that they needed to save money.”

One particular family has been out of work for over a year. But while they are working hard to find jobs and generate income, they aren’t worried.

“They said, ‘You’ve taught us to read the Bible, and in the Bible, we find that God is sovereign, that He sustains us, that He protects us always,’” Oscar Paul said. “And the Lord tells us that we don’t do anything good to ourselves if we are worrying about everything – that every day has its own worry. They’re trusting the Lord. And they have peace.”

“They said, ‘You’ve taught us to read the Bible.’”

But after only the second workshop, Oscar Paul’s leader decided not to continue with the WordPartners training. Oscar Paul tried to spread the training to other church plants from his church, at least to the point of the training Oscar Paul had already learned.

A VISION FOR ALL OF ECUADOR

Then he asked WordPartners’ Latin America regional director, Patricio Paredes, what it would take to start more training. This time, however, Oscar Paul didn’t want to facilitate training for only his own denomination. He had a vision to offer it to pastors and churches from other denominations and, ultimately, provide a “blueprint of the Word” for all of Ecuador.

He had a vision to provide a “blueprint of the Word” for all of Ecuador.

Over the last ten years, Oscar Paul has partnered with Patricio and other Ecuadorian pastors to spread WordPartners training in various parts of the country. And in time, an Ecuadorian team of WordPartner trainers has emerged.

Oscar Paul’s national and cross-denominational vision has begun to materialize.

“For our denomination, it wasn’t common to invite or be in relationship with other denominations,” he said. “We weren’t partners with pastors from other denominations in anything. And so we started working together as a  team in a way that combined our differences and by doing the trainings together.”

Oscar Paul and two other Missionary Alliance pastors also intentionally cultivated the relationships with other denominations by attending meetings of fellowships of pastors throughout the city, said Patricio.

“They decided on their own initiative that it was imperative for them to start meeting and be with them, and so they got to know many of them,” Patricio said. “And so that opened up some doors.”

Oscar Paul and his other WordPartner trainers intentionally don’t argue about doctrinal differences among the denominations but instead encourage them to let the Word itself shape everyone.

“[We] have the position that we all need to grow in those areas and work together in those areas, that nobody knows everything, and that we need to teach each other,” he said.

And the training has brought them closer together in ministry, too.

“Through the training, we thought that that would allow us to become partners with them,” he said.

Oscar Paul is now WordPartner’s national coordinator for Ecuador. His vision for providing pastors of various backgrounds throughout Ecuador with better Bible study tools is an example for the rest of the Christian world, Patricio said.

“That’s the beauty of understanding what the Lord wants the church to be – to be one in Christ,” Patricio said. 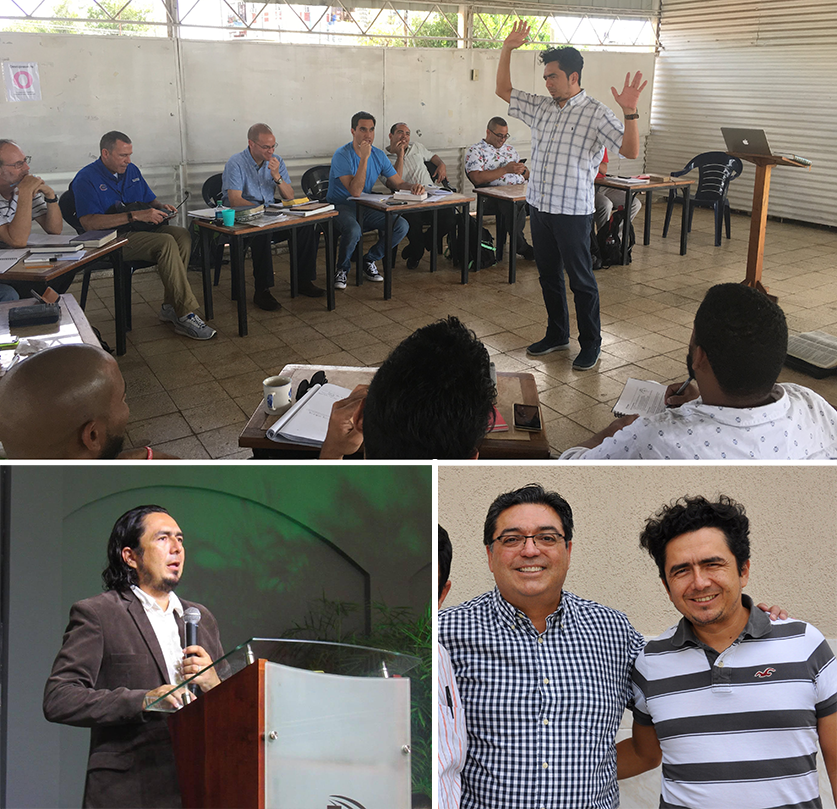 Partner with Oscar Paul in Prayer