This is the final part of the series How to Shape Your Ministry Around Disciple Making.

SM: The fifth and final part of the process is what we call maintaining momentum.

This is very important, because so often we get excited at the beginning of the school year, we launch a new ministry initiative, and maybe it runs out of steam by Christmas. We’re busy and we get tired. It’s very important to maintain momentum. Part of maintaining momentum is that constant cycle of reforming your personal convictions and doing loving honest evaluations.

How is the ministry growing? Where are we seeing gospel growth in people? Are there blockages that are stopping us? Do we need to change our tactics perhaps? Perhaps what we are doing isn’t working. We need to find another way of doing it.

Part of maintaining momentum (this might sound counterintuitive) is giving each other permission to fail. If we don’t feel there’s momentum and we realize it’s because it’s not working, it’s okay to say, “This didn’t work. Let’s fail forward. How do we learn from this? And then, how do we change it and then try a new initiative to do it?”

Another key component for maintaining momentum is what we call the Uluru Graph (as developed by Phillip Jensen). 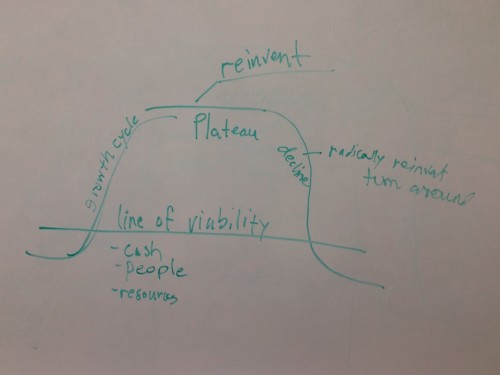 The Uluru Graph (above) contains an incline, a high long plateau, and then a decline on the other side.

When you think about the life cycle of a typical church or ministry, the first five to ten years is just starting up and growing. (That is the beginning incline).

At some point in the startup phase, you need to hit the line of viability. The line of viability is where you have enough people, enough finances, and perhaps a place to meet so that you’re a viable ministry. That can be anywhere from two years to ten years, depending on your context.

Eventually, the initial growth will wear off, and you will plateau. When you plateau, it’s important to understand that the length of that plateau will depend on your ability to reinvent yourself as a ministry – to innovate and implement. I’m not talking about being creative for the sake of being creative, but always asking ourselves, “How are we doing making disciples? Do we need to reinvent the way we do things? Do we need to keep innovating and growing?” So, I’m not talking about marrying the culture – just asking ourselves, “Are we reinventing?”

If you don’t reinvent, the plateau period will be shorter for your ministry, and eventually, you will start the long slow road of decline. Once you decline, it’s very difficult to turn around. Eventually, you will get below the line of viability, where you won’t have the finances or people anymore. And the ministry will end up dying and closing its doors. So, when you are on that plateau, you need to keep reinventing and implementing.

If you are below the line of viability, maybe it’s time to have that hard conversation that it’s time to close the doors.

KH: One hard reality of the five-step process outlined in The Vine Project is that implementing the process takes time. You can’t just plow through it in a year or two. What encouragement would you give to a person who is a pastor at a church that just has an uphill battle of changing church culture?

SM: First, I would like to remind them of something I remind myself of that Martyn Lloyd Jones said many years ago: “Soul work is slow work.” I’ve called that to mind many times when I’ve been discouraged in ministry or I’ve been meeting with someone and feel like nothing is happening. The reality is that the truth takes time.

It’s helpful to remember that God is very patient with us. He is a careful gardener, pruning us as we go. It’s a process of years. When we were converted, it wasn’t overnight that we had all our theological “i”s dotted and our “t”s crossed and we were mature Christians. God is slowing pruning us, growing us, and transforming us in the image of His beloved Son, Jesus Christ, through the Word of God and prayer by the power of His Holy Spirit.

The reality is that it takes most churches about five years to turn the first corner. The hard thing about that is, typically in a church, most pastors last three to five years, and then they move on. They get frustrated, or the congregation gets frustrated with them. “We’re not seeing enough change, and it’s time for you to go.” Or the pastor thinks he’s not seeing enough changes and, “It’s time for me to go.”

And I say, “Stop! Actually, this is where you just might turn the first corner.” Don’t leave after five years. After five years have an evaluation with your team and ask where you are going. Then ask what’s next?

KH: As we said, the fourth “P” of the four “P”s of discipleship is perseverance. So, may the Lord help us persevere, and may those who are reading persevere in the ministry of making disciples.

SM: Absolutely. And I just want to say as well, Kevin, that we need to remember that people are not projects. God has called us in ministry to shepherd His people. People take time, and every person is different. So, when you go through these phases of conviction with your church, some people will be on board with you right away. Some people will need time to be convicted and convinced that this is the way to go. And some people might stand against you. That’s just the reality of ministry. So, you’re working with people, and every person is different. It just takes time.

Learn more about The Vine Project or Vinegrowers Ministry.