Shaped by God’s Word during times of uncertainty

Editor’s note: The story below was written before the crisis in Ukraine began to unfold in late February 2022. After it was written, Andrii and his wife fled for safety from the city in which they were living, yet Andrii continues to teach God’s Word during this difficult time.

WHEN ANDRII KHUDIAKOV WAS A TEENAGER in Ukraine in the late 1980s, he had a choice to make. He could choose to believe in God. Or he could follow the advice of his communist teacher to stay away from church. The second option could open a spot at a university, get him a good job, and maintain favor with Soviet officials.

He chose to believe.

He grew up in a town of 300,000 with only one Baptist church and a Christian mother who took him despite the fact that taking her child to church could jeopardize her job. Andrii graduated from high school in 1990 amidst big changes. He was allowed to go to university – the document stating he was a believer no longer was required. Then the following year, the Soviet Union fell.

THE FREEDOM OF CHANGE

Now others, too, could choose to believe. And that presented another opportunity for Andrii.

“You could sense in the air this freedom,” he said. “Churches started growing rapidly. Now, when I look back, I understand that God was at work by His Holy Spirit and brought this freedom, this spiritual freedom.”

Andrii began to serve as a youth minister in his church. Then one day in 1993, he had an idea.

“I’m walking home from church and all of a sudden, I have this interesting desire in my mind, in my soul,” he said. “I want to go somewhere where there is no church. I want to start planting churches.” Andrii began to take the youth on trips to conduct evangelistic meetings. “In time I planted our first church, and then later I became a mission coordinator for our region.”

“You could sense in the air this freedom,” he said. “Churches started growing rapidly. Now, when I look back, I understand that God was at work.”

In the meantime, Andrii’s church had developed a sister-church relationship with a church in Illinois – New Covenant Bible Church – where both Doug Dunton and David Sunday (both now with WordPartners) served on staff. In 2013, Andrii visited New Covenant. Doug had begun working with WordPartners, and he brought up the idea to expand WordPartners’ training to pastors in Ukraine.

Initially, Andrii didn’t see the point. Ukrainian pastors had access to seminaries. Why would they take time away from their busy ministries to attend this training? But Doug attempted to make the case for training that focuses on God’s Word and goes deep, giving pastors tools to stay faithful to the authors’ intent while trusting God to use His Word to transform His people.

After running out of arguments, Andrii remembers with a laugh, Doug finally said, “Let’s just try it.”

WordPartners launched its first Ukrainian training in 2014. At first, Andrii simply helped to coordinate the workshops in which he participated. But the training caused him to see the need for helping pastors encounter Christ in a way that changes them and, in turn, shapes their congregations.

So Andrii’s relationship with WordPartners began to deepen as a training partner. Early on, he was mentored by Doug Dunton, and then more recently, by Sean Martin, who now serves as WordPartners’ regional director for Europe. Together, Andrii, Sean, and a team of Ukrainian training partners have been working to multiply the training, helping other pastors learn to teach God’s Word more effectively to congregations throughout Ukraine.

“This partnership is about studying the Bible, digging into God’s Word, not talking about how to study, but working with it,” Andrii commented. “Instead of discussing the recipe, let’s make bread together.”

“This partnership is about studying the Bible . . . , not talking about how to study, but working with it. . . . Instead of discussing the recipe, let’s make bread together.”

Not only did Andrii see other pastors grow in the training, but his own personal relationship with God was transformed. And his ministry was transformed as a result.

“For me personally, this way of working with God’s Word helped me to organize my thinking process in order to immerse my mind into God’s Word, to start meeting with the Person, God, who transforms me,” he said. “It allows the Holy Spirit to speak to my heart, then empower me to pass this Word onto pastors. I believe that God placed WordPartners in my life back then knowing I would be going through this stage now.”

The difference in Andrii and other pastors’ lives was clear. Men whose cultures have taught them to be hard were changed through the transforming power of God’s Word.

“We humbly went over there and served, and God’s Word transformed their lives,” Doug reflected. “The Word of God is for all people everywhere, and I continue to see it powerfully impacting the pastors’ lives, and Andrii is an illustration of that.”

A HEART FOR GOD

For about 15 years after the Soviet regime fell, people were growing in their understanding of God, Andrii said. But the last 15 or so years, the busyness of modern life has provided competition to the introspective pace of faith in Ukraine.

“I see the modern time being similar to the old time when God would rebuke his nation,” he said, then summarized God’s words: “You come to me. You bring your offering to me. But your heart is far away from me.”

It was the busyness of ministry that competed with Andrii’s walk with God. This gave him another important choice to make.

“When I was really active in ministry, I made a statement which sounded really cool to me back then,” he said.  “I said that my ministry activity, my doing for God, is equal to my personal relationship with God. And that’s wrong. And it’s dangerous, because it can get you to the point where you’re exhausted. And you will start seeing yourself, your identity as a Christian being based on the results that you get in your ministry and based on opinions of others about you. You start functioning on your own terms, on your own efforts.”

So, last year, Andrii spent more time with God and in the Word.

“I decided to slow down, to set apart all the projects I would be involved in previously and just to give the Lord my time fully,” he said. “I’ve been going through this refining and refocusing process of my own ministry.”

From that period of introspection, Andrii decided to focus on equipping pastors with WordPartners. He hopes that others will experience the same personal transformation. And he’s taken on the role of national coordinator for WordPartners in Ukraine.

“WordPartners is on the same page with my heart’s desire, to stay connected with God through His Word, written and spoken through the Holy Spirit,” he said. “I would love to see fellow pastors doing the same that I did.”

It’s that heart’s desire that has led to greater ownership in Ukraine where the training is now fully Ukrainian led and set up to affect future generations of Christians. “They’re owning this work,” said Doug Dunton. “They’re multiplying this work. They’re transferring this work, and we’re seeing lives transformed in Ukraine.”

FAITHFULNESS IN THE MIDST OF UNCERTAINTY

Speaking from his home with news of Russian troops at Ukraine’s border, Andrii faces many uncertainties and questions and choices yet again.

“At this time, it is a real test for Christians, whether they’re being theoretical or practical,” he said. “This spiritual sensitivity, it’s vital now, especially when you see all the stuff going on in the world, like pandemic and war. I want to understand what’s going on, not by reading the news, but by what’s going on in God’s kingdom, asking, ‘God, what are you doing now? I want to align my heart and my efforts with you, God. Not with what I hear.’”

Andrii takes comfort that the God of the Old Testament, who protected His people during war, is still working today. And he plans to stay connected to God as he ministers to Ukrainians.

“My ministry flows out of my relationship with the Lord,” he said. “He wants to work with me and through me.”

He asks people to pray for Ukraine, for peace for both Ukraine and Russia, for God’s mercy and justice, and also for people’s faith to grow during this difficult time.

“Lord, please bring your people back to you, because Christianity has become too easy,” he said. “Now is the time that a minister or pastor, especially, needs to develop a very deep relationship with God, with the Holy Spirit, and to seek His face, seek His wisdom, not only to be called ‘successful,’ but to understand how God moves now.” 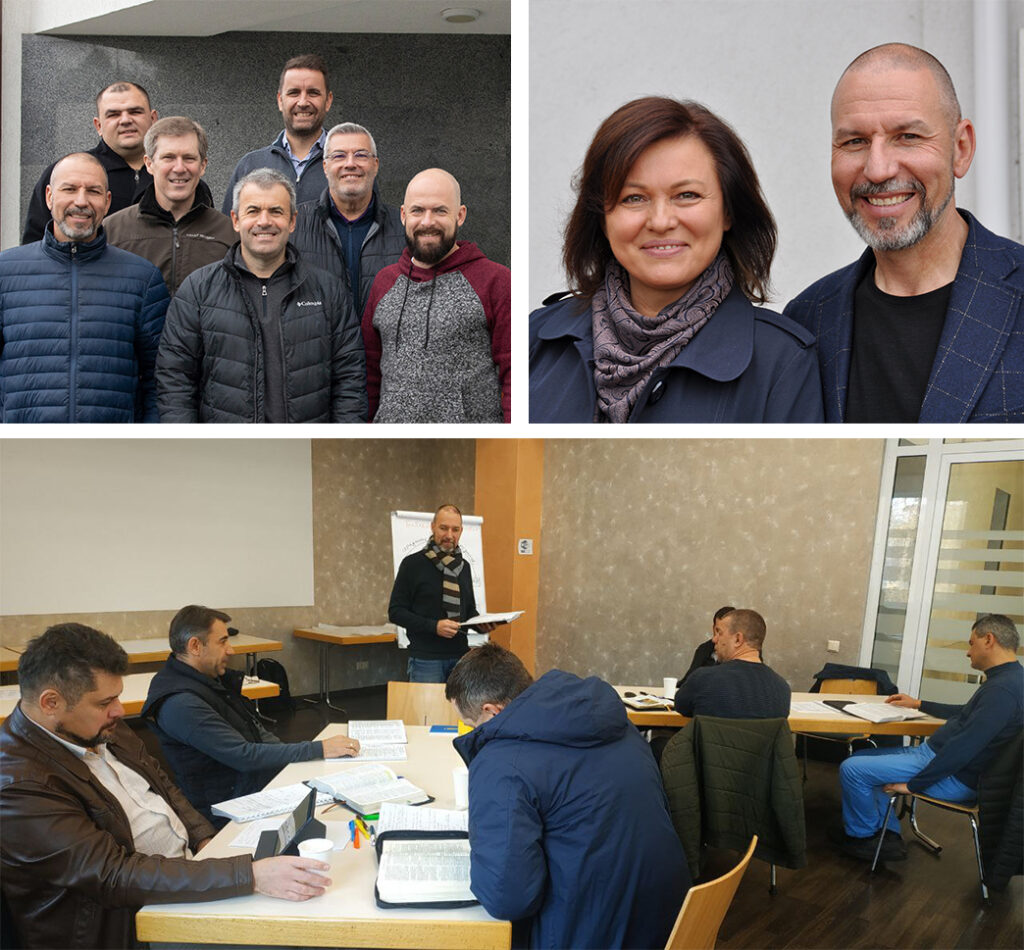 Partner with Andrii in Prayer